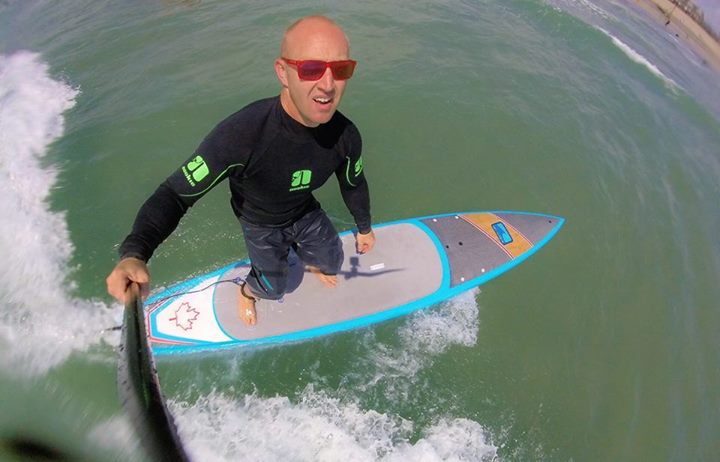 Blu Wave SUP UK recently took delivery of their new 12.6ft Fathom touring board. Pitched as a lively all rounder we were keen to hop on for a spin and got the opportunity during a recent breezy/mushy south coast swell day.

Brand manager Nick Hepworth was keen to point out the construction methods used in the Fathom so we duly took note. Featuring an extensive array of carbon material, mixed with wood sandwich, it’s a lightweight stick that’s easy to transport. The full cockpit deck pad is a nice addition for those with ‘office’ feet, although we couldn’t help but wonder how much further weight reduction would benefit without so much padding. That said, there’s no hassle getting the Blu Wave Fathom to the put in and we were frothing for a session.

During testing we had flat water, moderate chop and an abundance of mush burgers – all chucked our way and perfect for this review. Jumping aboard you can instantly feel the Fathom’s playful nature – the board’s personality feeding back to the rider from the get go.

Tracking is efficient once the paddling sweet spot has been located and even with chop coming from all corners the Fathom remains composed. Only heavier riders may find themselves having to put the odd corrective stroke in to remain upright.

Sweeping around the break Blu Wave’s Fathom feels like it’s on a mission. We were keen to drop into a few walls so duly put this pent up energy to good use.

Rolling in from way out back (unsurprising with a 12.6ft) the Fathom picks up swell super easy and gives paddlers time to set a rail.

There’s not much rocker up front and therefore being right on the tail will pay dividends if attempting to ride any kind of swell – rolling or breaking. It’d be worth waxing the small area of bare board next to the leash plug, just to avoid unnecessary dunkings and accurate foot placement is key to keeping the Fathom surfing efficiently.

Back on the flat and it’s a fairly quick ride downwind with bumps picked up and used to generate maximum forward thrust.

Blu Wave have produced another spiffing design with their Fathom 12.6ft tourer. Performance is towards the middle to upper range of skill levels and the board’s lively nature will be welcome to those looking for an engaging ride. Perfect for light weight paddlers looking to partake in a bit of exploring or bigger boned individuals searching for a coastal SUP tool that pricks the interest and keeps stoke levels high.